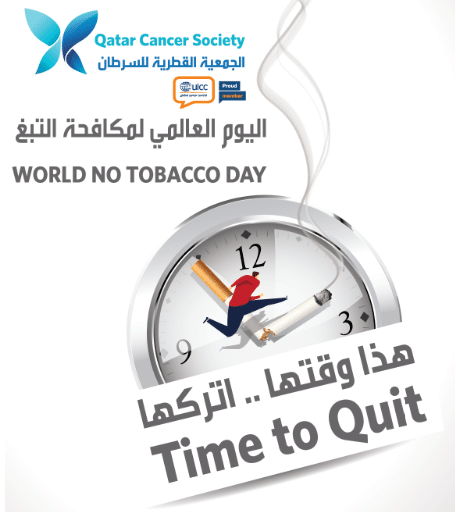 ” Time to Quit” campaign to raise awareness of harms of tobacco

Qatar Cancer Society (QCS ) continues its efforts to raise awareness about the disease, Where it launched an electronic campaign” Time to Quit” campaign in the framework of World No Tobacco Day ( WNTD ) on May 31 every year , Which aims to raise awareness about the dangers of tobacco and emphasize the importance of quitting smoking, The contest also aimed at promoting a healthy lifestyle to prevent the habit.
Heba Nassar, head of the Health Education Department at QCS, said- the charity has launched ” time to Quit” Awareness campaign via its electronic platforms Within the framework of the preventive measures to limit the spread of Novel coronavirus disease 2019 (COVID-19) , by broadcasting awareness messages and videos related to the general health effects of tobacco , types of smoking and Ways to help in quit smoking .
“We are doing this campaign of WNTD to raise the awareness in the community about the importance of quitting smoking, effects of active and passive smoking,”
This campaign is happening To complement the awareness role of the charity since its establishment in 1997 To raise awareness about cancer and correct the misconceptions about it. She added .
Dr. Hadi Mohamad Abu Rasheed- Head of Professional Development and Scientific Research Department at QCS said – Smoking is a risk factor for lung cancer and according to Qatar National Cancer Registry (QNCR) – Ministry of Public Health – 2016 that In Qatar, Lung cancer is the ninth most commonly diagnosed cancer in 2016 , and is the first causing-death cancer in 2016.
There were 50 cases diagnosed with lung cancer in Qatar, 80% of the cases in Qatar were males and 20% were females , 76% of the cases in Qatar were Non-Qatari, while 24% were Qatari , 50-54 and 55-59 years old were the highest age groups with lung cancer incidences and In Qatar, lung cancer survival rate from 2013 till 2016 is 24.24% which means that24.24% of lung cancer patients stayed alive from 2013 to 2016. He added