Qatar Cancer Society (QCS) marked the 25th anniversary of its founding in 1997, with a ceremony attended by several ambassadors of foreign and Arab countries, public figures, partners, sponsors, and the media at St Regis Hotel, coinciding with the conclusion of the charity’s ‘Blossom’ breast cancer awareness campaign. 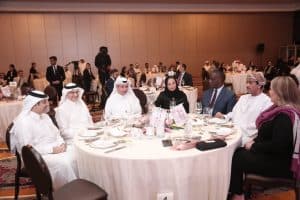 The guests included ambassadors of the US, Canada, Australia, Spain, Switzerland, Jordan, Oman, Saudi Arabia, and Lebanon, the charge d’affaires of Singapore, the deputy head of the French mission, the editors-in-chief of the press institutions, directors of television channels and radio stations in Qatar, and channel managers. The ceremony also witnessed honoring of the media partners and supporters.

Dr. Khalid bin Jabor Al Thani, chairman of QCS, welcomed the attendees, saying, “We have gathered here on one goal — emphasize the importance of partnerships in building communities. The Qatar Cancer Society completed its 25th year with your support and contributions. With your continued support, it will continue on its path, giving back in gratitude for the benevolence of this great country under our wise leadership.”

During his speech, he spoke about the establishment of the charity. “It was a committee composed of a group of ministries and state institutions until it was officially announced and established in 1997 and launched from a simple and modest headquarters. It later moved to a larger headquarters with the increase in the number of employees,” he said.

Aisha Al-Tamimi presented her experience of recovering from cancer, while her husband, Ahmed Abdulmalik, also shared the experience from the family’s view.