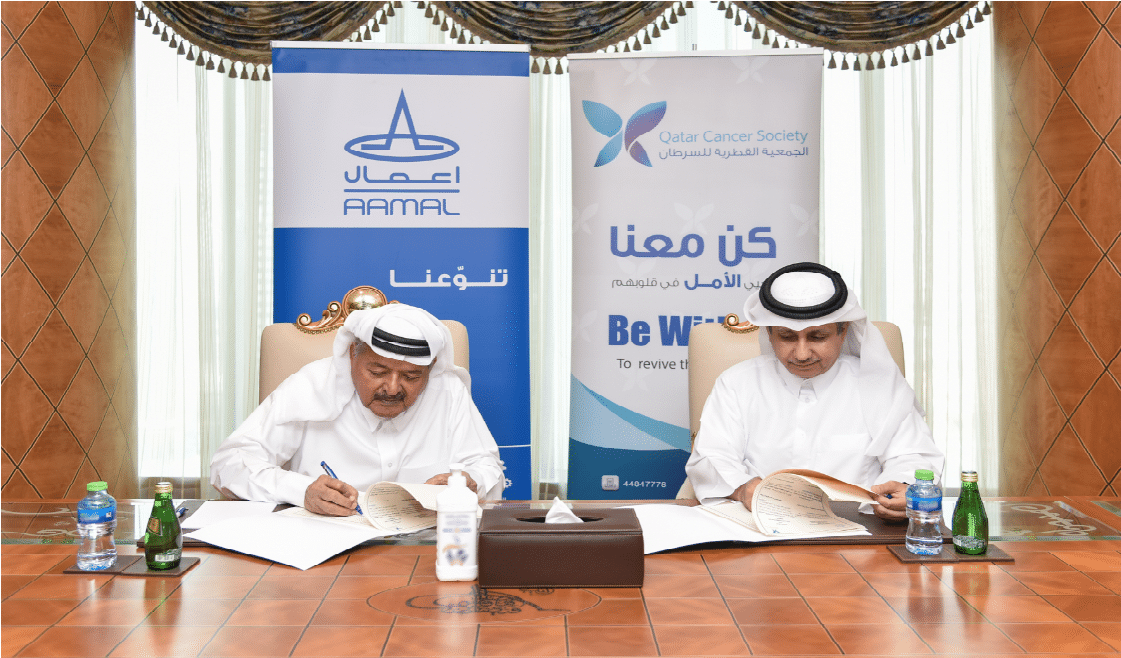 Signing a cooperation agreement with ” Aamal “

Aamal Company (Aamal), one of Qatar’s leading diversified companies, and Qatar Cancer Society (QCS), a charitable association that focuses on implementing awareness and prevention programmes aimed at raising awareness about cancer among the community and healthcare employees, have signed a co-operation agreement.

The agreement will see Aamal provide financial support to QCS to help support cancer treatment for patients who cannot afford it otherwise and see Aamal work with QCS to prevent cancer, develop early detection processes, and support and empower those fighting cancer, according to a press statement.

HE Sheikh Faisal said, “It gives me great pleasure to witness this agreement with Qatar Cancer Society, such an important national institution specialised in spreading awareness of cancer, and a great support for those who are fighting it. QCS is well known in our society for its professional development programme and scientific research. We hope this co-operation will be the beginning of a productive and sustainable relationship for all parties.

“Aamal is always keen to play an active part in society, supporting our mission of seeking a better society, investing in human capital and developing scientific research and innovative methods in all fields.”

“At Aamal, we appreciate the important role played by QCS through awareness programmes that are transparent and have a clear value in increasing cancer awareness across the entire community, especially through the QCS educational centre, which is the first of its kind in the region. We are also very aware of the importance of partnerships between various sectors in our society in order to prominently position Qatar globally in the field of cancer prevention and mitigation, strengthening the role of the private sector in supporting the private sector’s social responsibility and delivering its message based on the health and safety of individuals,” he added.

HE Sheikh Faisal also affirmed Aamal’s willingness to continue this productive relationship with QCS in a way that contributes to the education of the community about cancer and empowers people to survive it. Aamal also aims to ensure that all important programmes reach all groups of the community through building its long-term relationship with QCS.

HE Dr Sheikh Khaled expressed gratitude to Aamal and HE Sheikh Faisal for their efforts to benefit society, especially in supporting cancer patients, and his wish that all institutions join hands to reduce the burden of this disease and its high treatment costs, indicating that the partnership between both parties will strengthen the concerted continuous efforts to combat cancer.

HE Dr Sheikh Khaled also indicated that the co-operation agreement between Aamal and QCS comes from their roles in serving society and that “this effective partnership to achieve goals and unite efforts for the benefit of all members of society is considered our top priority of our strategies and efforts towards achieving Qatar National Vision 2030”.

The chairman of QCS considers this co-operation to be an important base for a strong future partnership that contributes to achieving QCS’s vision and mission to become the community’s partnerships’ platform that leads Qatar forward in cancer prevention and the mitigation of its effects, through working with partners to raise community awareness, support and empower patients, and enable professional development and cancer research, with the objective that this co-operation will continue in the interest of the society and the nation.