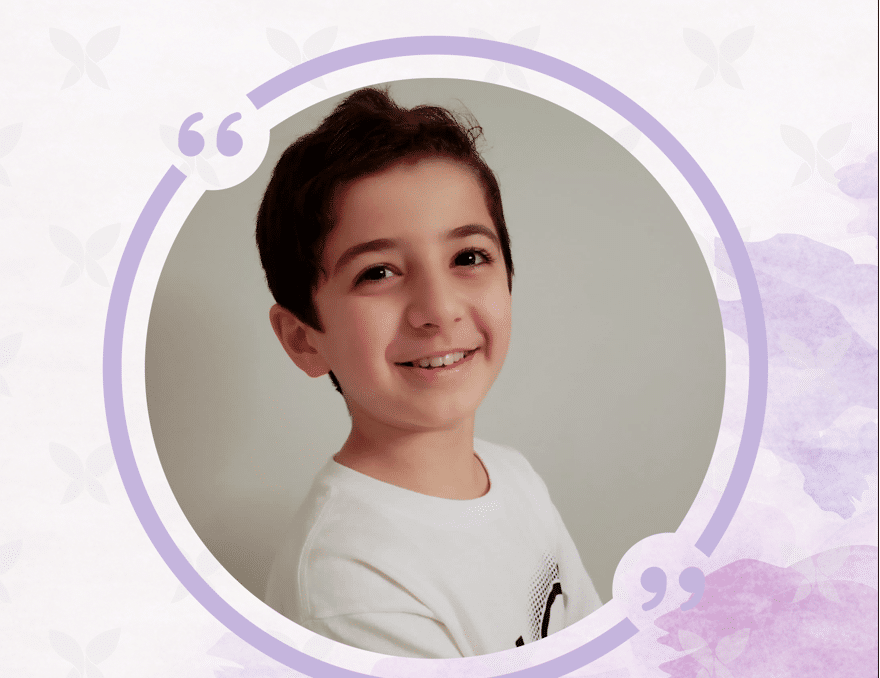 Sami Fattouh: I am proud of myself for defeating Cancer

My name is Sami Fattouh. I am eight years old, I am Syrian and live in Canada, and I go to Fairview public school. I have fond memories of Qatar, the country I have lived in and one of the most beloved countries to my heart.

I speak Arabic and English. My parents have enrolled me in a different school to learn Arabic after they felt that I started to forget it little by little because of living in Canada. I love to play in public parks and ride bikes. My dream is to become an adventurer, a paleontologist, and an astronaut in the future

When I was three years old, I started to feel pain in my leg, but my parents did not want to worry me, so they told me that I had to go to the doctor to know the reason. when I was six years old, my parents told me, “we did not want you to be anxious when you were young; you had cancer since you were three.” At the age of seven, my parents informed me more about Cancer and how it varies. I learned more when I started school. The treatment lasted for 36 months at the hospital. I completed the treatment, checkups, and medication at home. I still remember when my friends visited me and bought me presents. my favorite gift was Air Wheels Cars.

Cancer has many types. Any of them may attack body organs. . You have to be punctual and take the medication in a strict amount and promptly. There was a playroom in the basement where I frequently played with my brother. Sometimes, I would stroll down the street with friends in Doha. But sometimes, the doctors recommended stopping visitors from seeing me. Therefore, in cooperation with Qatar Cancer Society (QCS), several volunteers would come to my room to make happy faces across the glass in the hospital and give me gifts so that I could smile and even laugh. The doctors were kind and friendly.

My grandparents and aunts were paying visits to me constantly, bringing gifts and favorite foods. I decorated my room during Ramadan with crescents, stars, and lanterns. My family accompanied me every single moment of my journey. We always engaged in different activities such as watching TV or playing cards. The intravenous treatment was painful; I was intense at times and weak at others. my uncle Mustafa and my uncle Khaled had their hair cut and said, “Come on, Sami, you have to have your hair cut.” I didn’t know that hair loss was a side effect of chemo. I guessed that they encouraged me to cut my hair because it was a competition.

I have been feeling pain sometimes but not always. One time my cheeks were ripped out of the inside from the chemo, and it was painful, so I had to go to the hospital. It turns out I had cracks in my digestive system. It took a month to treat these cracks. I was no longer able to eat. I lost weight quickly. There were dry spots on my cheek inside, and I was crying from the pain, but soon I was playing and stopped crying. I liked to eat the pasta that the hospital served, and my mother started cooking it for me at home. I am used to eating it, and to this day, I call it ‘the hospital pasta.’ I also used to ask my mother to call my grandmother to ask her to make me kibbeh and mahshi.

I was so proud of myself when my parents called me Victor because I had beaten Cancer; Cancer significantly prevented me from hanging out with friends, going to preschool, and riding horses and bikes. It even stopped me from strolling down through the park. However, I used to take a walk in the hospital garden and play in the games room. I used to ask my aunt to take me to the games room during closing hours, and I used to go back to my room sadly to compensate my aunt, who gave me an iPad, to play games and watch YouTube together. I was accustomed to playing with toy trucks and characters, and I liked to run outside with my brother Iyad, but unfortunately, I could not run fast.

I was bored in the early days of my stay in the hospital, but I stopped being bored with the help of QCS and my family. My friends used to come to visit me and bring toys. I put those toys aside to be a souvenir for these difficult days. My brother and I frequently played with them. I have donated some of the toys to those in need. QCS used to give many gifts, and some of their members warmed my heart, especially when they dressed as clowns and cartoon characters.

QCS has provided me with a lot of support and encouragement by inviting my parents and me to the events they organize. When I finished the treatment period, I could do everything. I will return to my usual life as before. I will sleep, as usual, go shopping and go to classes.

The mother tells her memories of this  journey, saying :

“Stories of hope and people’s life experiences are the most important things that patients and their families seek. What matters most is that they are the hope and motivation to give more hope. Patients and families are looking for similar experiences and success stories that inspire patience and hope.

When the doctor told us that Sami had leukemia, it was a huge shock. Nevertheless, the involvement of our family and friends around us was a helpful factor in relieving the situation. Besides, credible doctors, thoughtful responses, and direct care from health professionals in Qatar have played a major role in introducing the disease to us and calming us. We still remember our first stays at the hospital as the most difficult phase of our lives.

سWe had thought it was the end. We know that Cancer is a diverse disease that affects people and ends their lives. We were trying to find out more about this disease and the recovery rate. We’ve been trying to hear any person’s experience that may lift our spirits and give us hope. I was praying for God to save my son and remove this ordeal. We quickly became ambassadors who spread hope among patients.

Sami responded to the treatment and medication processes despite the difficulties and complications. As a result of the lack of immunity, he sometimes developed some infections, and treatment was stopped. He has been infected with hepatitis, fluid retention, and heart inflammation. The cracks in his cheek, which Sami talks about with a smile now, was one of the most challenging experiences he went through. These ulcers continued for 30 days, and he could not eat or drink, so the condition worsened. His digestive system became completely ulcerated due to chemotherapy until the doctors temporarily stopped treatment. Eventually, he recovered.

After Sami was discharged from the hospital, we decided to play a role in alleviating people’s suffering by paying short visits to other patients, telling them Sami’s success story, and providing them with advice. Through the effectiveness of QCS, I can inspire you with our journey. I am thrilled with Sami while describing his story, a hero, to achieve his voice faster and reach a more significant segment of society.

We were waiting patiently for Sami’s day of recovery, and I took photos and videos to document the moments in his journey. Our feelings were a mixture of joy that we ended this phase of his life with some concern about a possible relapse, God forbid. Still, this obsession haunts me even now, but it will gradually ease with time. However, I relate any minor illness of Sami to the possibility of his illness returning.

In conclusion, I would like to extend my sincere thanks to QCS, who are still by our side. They have supported us financially and emotionally. Their programs and targeted activities mean a lot to families and patients.