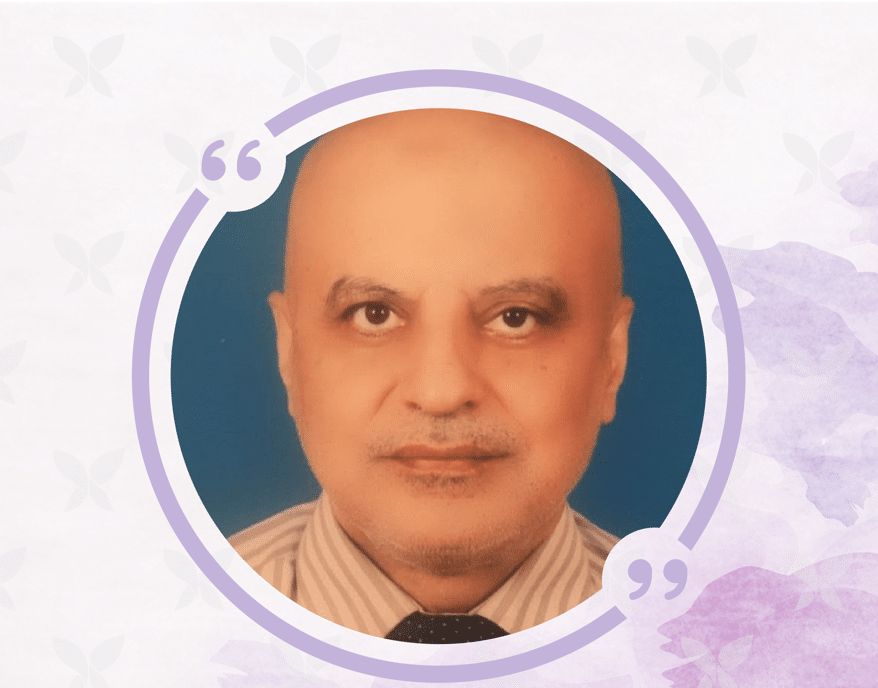 Mohammed Shabaan: with patience and faith, I’m living with cancer

Mohammed Shabaan is a 55 years old man who has always been on a healthy diet and followed a fitness regimen, describing it as a way of living. He has his small farm at home where he grows various kinds of fruits and vegetables. He has always been interested in the wide range of benefits these organic corps provide. For example, the Moringa tree is one of the corps he is harvesting on his farm; it reduces blood sugar and has anti-inflammatory and antioxidant effects.

March 2017 was the time Mohammed described as the time he “dropped down.” this initially started as mild constipation, which he attributed to ingestion of pomegranate; however, the constipation was persistent and remained for ten days, and he decided to seek medical attention. He was given laxatives, but his condition did not improve. Then, he started having a sudden onset of vomiting, which was severe as he felt tired and energy drained. The accumulation of all these symptoms led to him not walking, so he called the ambulance.

Mohammed had multiple tests done; He had both CT and PT scans done, which concluded the potential of having Stage 3 Colon Cancer. He had never imagined this diagnosis as he thought these symptoms would be due to a fleeting cause, which can be resolved quickly and last a few days. As he requested, the news was brought to him in a friendly manner in the absence of his parents. Once Mohammed was informed about his diagnosis, the only thing constantly on his mind was the surgery and the complications that followed the procedure. He was ready to confront the struggles which are brought to him by his fate which, in this case, had brought him cancer. “Cancer? I don’t care about it,” he said as I asked him about what he felt when the physician told him about his condition, prognosis, and management. Mohammed proved that each person could beat disease by learning how to cope with it.

He was constantly thinking about the complications he could avoid; one of these dreaded complications was temporarily placing a colostomy bag until a reconnection between the colon and the rectum heals. He was anxious and worried about the perspective of his friends and family regarding the idea of having an external bag for feces. He thought that this might ruin his image and reputation in front of them.

This discussion continued for a long time until the physician decided that an urgent surgical intervention should occur as the patient had a bowel obstruction, leading to fatal sequelae. The physician tried to insert a tube to remove all the poisons from Mohammed’s abdomen, but they could not. However, another surgeon arrived in Qatar that day and was called to the Operation Room (OR). This surgeon was determined not to leave the OR until he inserted the tube. Mohammed described him as one who has confidence and trust in god’s will. He could insert the tube without any complications and danger to Mohammed. “These were all complications that only God knows of,” said Mohammed, believing that he was in a sophisticated situation, which was leading to a path of his wellbeing and survival.

The removal of the poisons from his body took one and a half hours. He felt better and more relieved afterward. He had surgical excision of 80% of his colon and adjacent lymph nodes. This journey was described as crossing an ocean with strong tides against him, but he passed safely; however, as this ended, another battle was coming up against him, which is Chemotherapy. The side effects of the chemotherapy were very severe; he experienced diarrhea and weight loss – He had lost 20 kgs. Nevertheless, he was relieved that he reached a state of almost winning the battle against cancer; the side effects did not matter as he had passed two storms set by cancer, the surgery, and the chemotherapy. He knew that he had reached the winning line with himself leading.

He found his family and friends very supportive and understanding during that period. Although there was a negative stigma of having cancer, he noticed that he and his family changed and became more accepting; they grew to accept that cancer, like any other disease, can be treated and should not be considered as the closure of one’s life.

Eight months after the surgery, Mohammed developed an abdominal hernia; he sought treatment and gained more strength to face this new complication. He sought both physical and mental treatment. He “Never lost hope” and was able to live through this dreadful journey of fighting cancer and its following complications.

Cancer was an “uninvited guest,” but you are forced to offer hospitality and welcoming like any other guest. Thus, one should find their support group and habits, which bring feelings of joy and happiness, to embrace this disease rather than allow it to drain them. It would help if you did not let this monstrous disease take over your lives and consider it as something that is only passing by but is offering you a grain of strength and enlightenment, making you a stronger warrior. Cancer is the beginning of a new life, not the end.

The “Step of Hope” initiative was launched in collaboration with the Qatar Cancer Society and the National Center for Cancer Care and Research. This initiative aims to support individuals living with cancer and emphasize that cancer can be cured. Patients can practice their daily life usually and highlight the importance of psychological and community support for this group to make the disease period and beyond easier and the importance of a healthy lifestyle of exercise and healthy food to prevent diseases, especially cancer.

During this initiative, I walked about 555 km on foot as the first phase and then completed the tour to cover 2022 km as a later goal, and we have chosen 2022 on the occasion of the 2022 world cup in Qatar, where I seek to walk about 25 km per day at a rate of five hours.

I want to emphasize that this initiative is an opportunity to strengthen the role of physical activity in the prevention of diseases, especially cancer, in line with the State Vision 2030 to improve human health, in addition to emphasizing the close relationship between cancer and mental status that may facilitate or prevent treatment.